Some of the widespread uses Roundup. 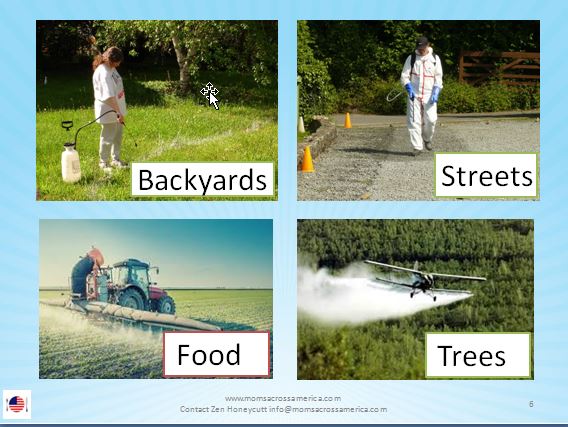 Almost everyone has heard of Roundup, the world's number one weed killer. Hundreds of millions of pounds are used every year in the USA alone. Globally, the active chemical ingredient glyphosate is sold in over 750 products by numerous chemical companies. It is sprayed on sidewalks, streets, along the sides of roads, on school playgrounds and city parks. It is also sprayed on the soil of our crops fields as a burndown before planting, on 80% of the genetically modified foods which are engineered to withstand Roundup, and as a desiccant (drying agent) on non-organic crops such as sugar, wheat, barley, dried peas, and beans.

Evidence of Glyphosate being used as a drying agent on wheat and other crops above.

Glyphosate does NOT wash off ( and yet it is sprayed on food)  and is claimed to target an enzyme which is NOT found in humans or animals. They refer to the shikimate pathway, which is found in humans and animals, in our gut bacteria.

Note: the glyphosate content of this product of Roundup ( average for sale in hardware stores) is 1%. Syngenta's product Traxion is 44.9% glyphosate and is used as a burndown on the soil in which grains are planted. This is extremely toxic. Canada is the primary source of grains for the USA cereals, beer barely, and animal feed. 400 ppm of glyphosate is allowed on grains. 0.1ppb of glyphosate has been shown to destroy gut bacteria in chickens.

1. Glyphosate is a patented antibiotic. Antibiotics kill gut bacteria, where 70% of our immune system lies. Glyphosate promotes the proliferation of pathogenic gut bacteria, which leads to the lipopolysaccharides on the outer walls of the pathogenic gut bacteria, sending a message through the vagus nerve, to the microglia immune cells in the brain to go on the attack. They create an excitotoxin called glutamate which kills neurons, causing inflammation, behavioral changes, brain fog, and could lead to autism, Alzheimer's, ALS and autoimmune diseases. 1 out of 2 of our children has a chronic illness in America.

3. An endocrine disruptor and to cause placental cell death at levels allowed in our drinking water. Endocrine disruptors halt or stop the development of a fetus. An infinitesimal amount ( thousands of times smaller than what is allowed on our food by the EPA) of glyphosate can cause permanent harm or death to a fetus, therefore it is not true that the set ADI or allowable daily intake is safe for our children. The USA is #1 for infant death on day one. We have 50% more babies that die on the first day of life than all the Industrialized world combined. - State of the World's Mothers Report, Save the Children

4. Glyphosate is a cell disintegrator, and can also break down the blood-brain barrier, allowing toxins into the brain, connecting itself to autism and Alzheimer’s. The rise in Autism is correlated with the introduction and increase of glyphosate on food.

5. Glyphosate has been scientifically shown to increase the cell growth of breast cancer tissue.

6. Glyphosate has been scientifically shown to cause damage to testes. Our infertility and miscarriage rate is 30% the highest in recorded history.

7. Glyphosate has been scientifically shown to cause antibiotic resistance, raising concerns to connections to the rise of superbugs such as MRSA.

8. Glyphosate has been classified by the World Health Organization, an arm of the UN, as a Class 2 "probable Carcinogen" ( with 1 being a definite carcinogen)

9. Widespread contamination and accumulation in the body. Despite claims by the manufacturer that glyphosate would " pass harmlessly through the urine", through citizen testing with Moms Across America, we have found glyphosate in breast milk and animal tissue. Glyphosate has been found in household drinking water (70% and higher), our children’s urine (10-12 X higher than was found in Europe), mother’s breast milk (760-1600X higher than is allowed in the drinking water in Europe) food such as Fruit Loops, wheat, and honey.

10. Glyphosate has been linked to miscarriages by doctors. Glyphosate is found to remain viable in salty, dark water for 315 days. It has also been shown to kill white shrimp at levels above 5.2 ppm. 25 ppm is allowed on our sugar, a common ingredient in USA foods. What is found in our wombs? Dark salty water. What is the size of a six-week-old fetus? The size of a shrimp. We currently have a 30% failure to conceive rate in the USA, the highest in recorded history. This correlates with the Ib Pedersen pig study which showed a 30% increase in sow miscarriages and birth defects when fed grains sprayed with glyphosate.

The EPA must act NOW to protect the people of the USA or be liable for long term health repercussions to our great country. Food manufacturers must be better safe than sorry and eliminate glyphosate from their ingredients regardless of the EPA's ruling.

30,000 Doctors have called for the BAN of Glyphosate from their country.

You can get validated testing done on your tap water or urine for glyphosate by clicking here;

Call the EPA today 703-308-8187 Neil Andersen Director of Pesticide Review Board and insist that they revoke the license of glyphosate, stop raising the allowable levels of glyphosate, and stop permitting products like DUO Enlist which is half glyphosate and half 2,4-D ( part of Agent Orange) on our food crops in 15 states in the midwest.