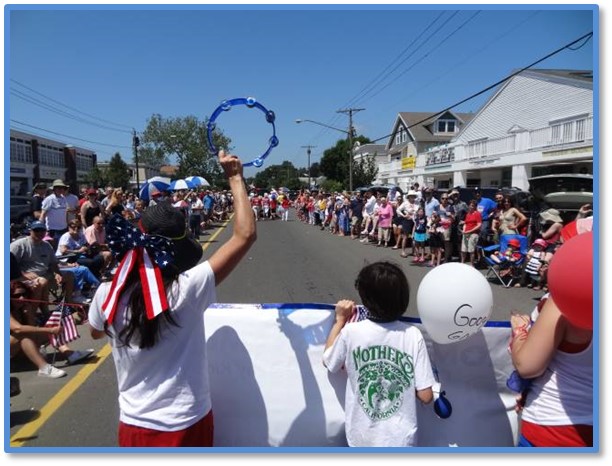 It was a clear, sunny day in Connecticut. It was hot but not scorching and there was a slight breeze now and then—just enough to bring a sigh of relief. We gathered in the Stop & Shop parking lot in the charming and affluent town of Madison. Groups of cheerleaders, firefighters, men driving tiny cars, floats, and trucks gathered in colorful groups around us. I was beaming with excitement and felt more alive than I had felt in months. Leafy, green trees lined the streets, which were packed with parade spectators in their beach chairs.

My family was with me, all decked out in their GMO? We’re NOT Buying It! and LABEL GMOs NOW! Because We Said So! T-shirts, holding signs we had made.

Around 10:00 a.m., it was our turn to start moving and join in the parade. Karen, the local leader, and I each grabbed our sons and the banner and began to walk. I couldn’t believe we were in a parade and that this was happening all across the country! I thought of Laurie Olson in Washington who had helped to support fourteen parades happening in her state, the Florida leaders who had twelve across their state, Kathleen, John, and a large group who were in a parade at Huntington Beach, California, which had two hundred thousand attendees, and over 170 other groups across the country—reaching millions that day. How amazing! As we turned the corner onto the main parade route, families that were all looking at us lined both sides. As we marched down the street, our group spread out to reach only a few feet from either side. We waved, smiled, and chanted for GMO labeling as thousands clapped for us and waved back. They were asking us and each other, “What is a GMO?” It was exhilarating! My heart buzzed with joy! Mission accomplished! 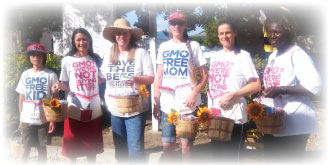 My sister, Chi, and my brother-in-law, Tim, pushed a bike trailer with both my youngest son, Bronson, and their daughter, Kaia, in it. My brother, Tao, pushed a shopping cart with a GMO-Free Shopper sign on it while my middle son, Bodee, sat in the cart and peered at the crowd. My sister-in-law Amy, though not a mom, but a caregiver of the highest sort, smiled while waving a plate decorated with the image of the US flag. My eldest son, Ben, marched proudly beside me along with about a dozen Connecticut residents.

My mother, Mavis, who was seventy-two years old, beamed with joy and held the sign she had made, while she chatted with the other participants. A family from Massachusetts came to march with us, all wearing matching black Non-GMO T-shirts. They ran up and down the crowds on the sides of the streets, passing out thousands of flyers.To have met so many dedicated, generous people and feel instantly connected with them, was such a blessing. 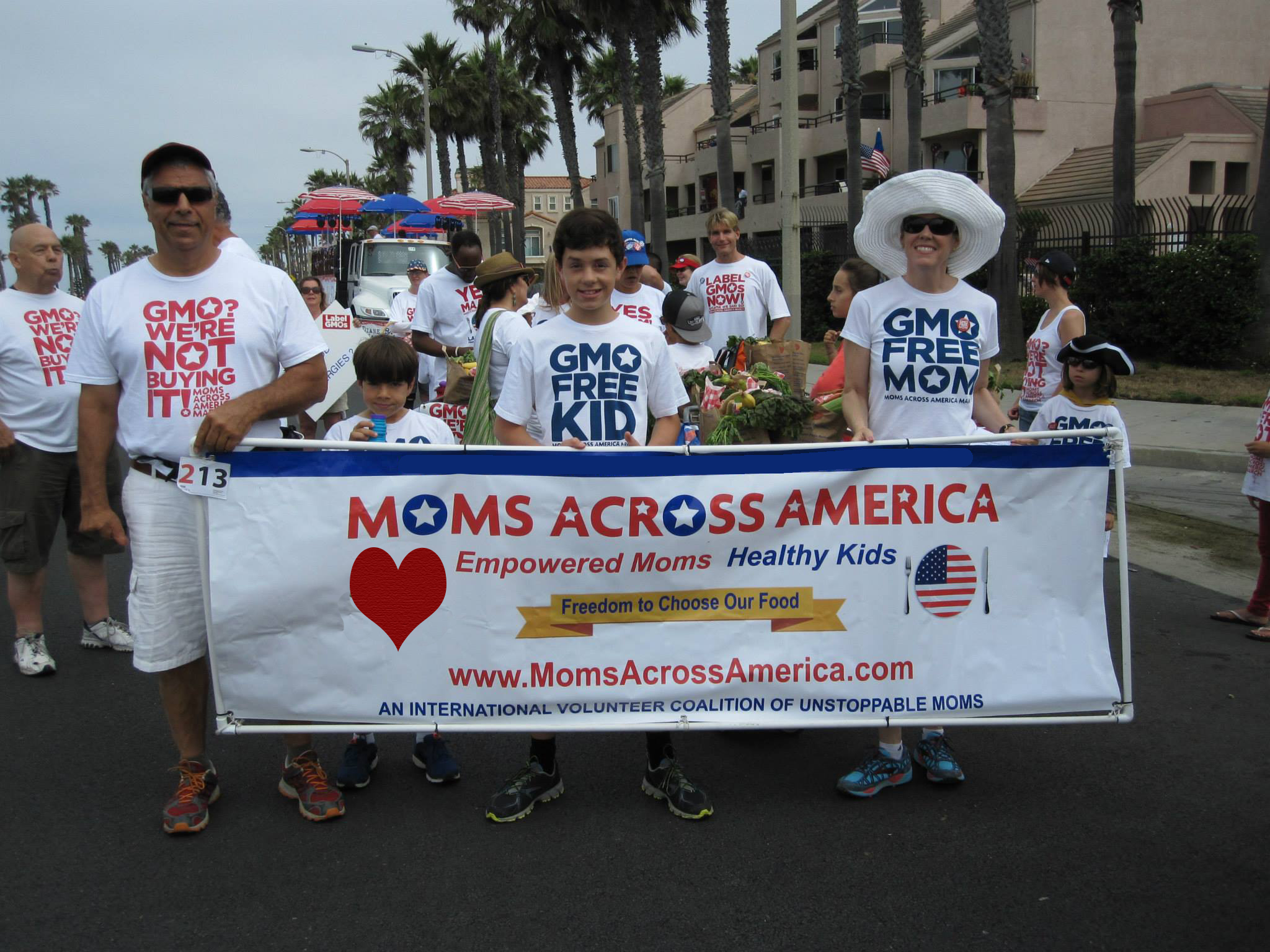 At one point during the parade, I switched places with one of the kids who was passing out flyers and let him hold the banner. It was so fun to pass out our brochures, look people in the eye and say, “Thank you for finding out more about GMOs!” or “We hope your family will be healthy and happy!” or “Do you know about GMOs? This will change your life!” When we made eye contact, I felt like I really was making a difference in their lives—I was showing them a new pathway to health. I gave flyers to grandmas who were cheering for us and to grumpy grandpas who at first wanted to wave me away but then gave me a shrug and a smile. I gave flyers to children to pass back to their parents and to teens who actually thanked me. I got to experience human beings as grateful, willing, and open.

Marching merrily in the raucous parade, we rounded a corner and were announced from the judging booth. “Next up, we have Moms Across America, a National Coalition of UNSTOPPABLE Moms,” there was cheering, “whose motto is ‘Empowered Moms, Healthy Kids.’ They are marching for healthy food, GMO labeling, and the right to know what is in our food. Let’s hear it for the moms!”

I felt love and light radiating through me. It was a moment I will never forget. Moms all across the country were experiencing this—being cheered on for taking a stand for the health of their children and country. If they felt even 10 percent as good as I did, it was all worth it! 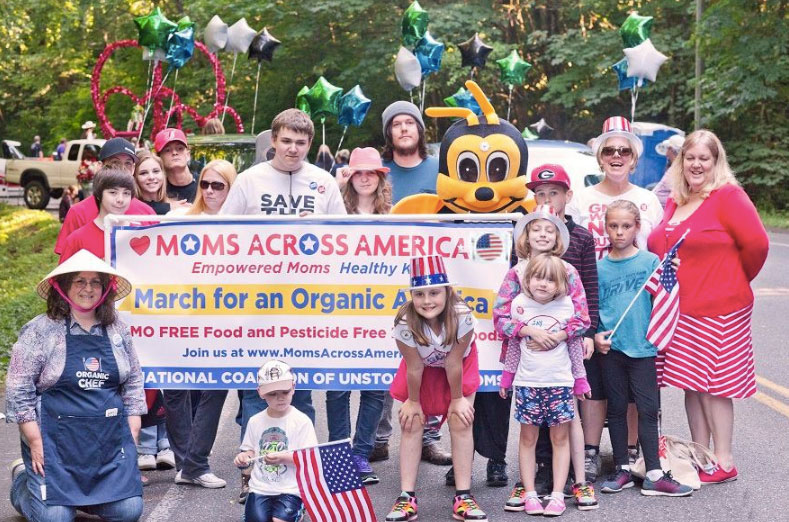 We estimated that with only ten thousand people at each of the 170 parades (some had five thousand, some had fifty thousand and some had as many as two hundred thousand), we reached more than a million and a half people in person and millions more through the televised parades and social media in a single day. We did this. Every mom and supporter who said, “Okay, I will gather some friends and join in a parade to let my whole town know about GMOs,” did this. Moms and families, without millions of dollars of advertising, without the promise of being elected to office, and without fame or fortune, did this.

The parades were new for our nationwide movement at the time. I hope after our events and the release of this book (UNSTOPPABLE: Transforming Sickness and Struggle into Triumph, Empowerment, and a Celebration of Community), we will see many other groups focusing on different issues join in the parades—fracking, climate change, health choice, money in politics—these causes could all reach so many people in Fourth of July parades.

Most registrations to be in a 4th of July parade begin at the end of May, about now, and cost about $30, or are free. Go to your city or town website and search "Independence Day parade" to apply! Use Moms Across America as your group and let us know if you have any questions. [email protected]

Content excerpted from UNSTOPPABLE: Transforming Sickness and Struggle into Triumph, Empowerment, and a Celebration of Community by Zen Honeycutt.