Glyphosate and Roundup: All roads lead to cancer 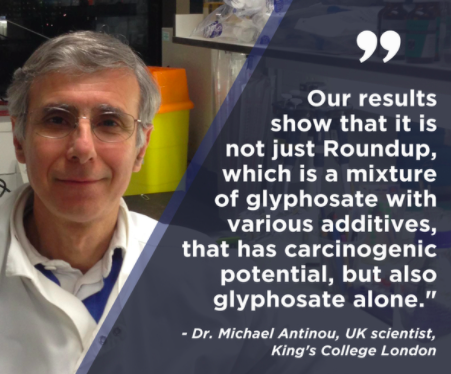 A new study shows that not just glyphosate herbicides (the full formulation), but glyphosate the chemical alone, contributes to cancer. Moms Across America invites everyone to read and share this article with their loved ones and to send an urgent letter now to the EPA to BAN glyphosate! There is no justifiable reason to be spraying a carcinogenic, endocrine-disrupting herbicide that causes liver disease and miscarriages on our food supply!

Clearly, we do not need a Cancer Moonshot, Biden, we need to stop spraying glyphosate and cancer-causing chemicals here on Earth! Now!

Glyphosate and Roundup lead to changes in gene regulatory microRNAs (miRNAs or miRs) linked with cancer, newly published data show. The analysis, of a type known as small RNA profiling, was conducted in liver tissue from rats exposed to glyphosate and Roundup MON 52276, an EU-approved formulation, over 90 days.

In the new results, Roundup MON 52276 was found to reduce the levels of miR-22 and miR-17, whereas glyphosate decreased the level of miR-30 and increased the amount of miR-10. These changes in miRNAs are important because they are known to alter the expression of crucial cell growth regulator genes, which can lead to the development of cancer. 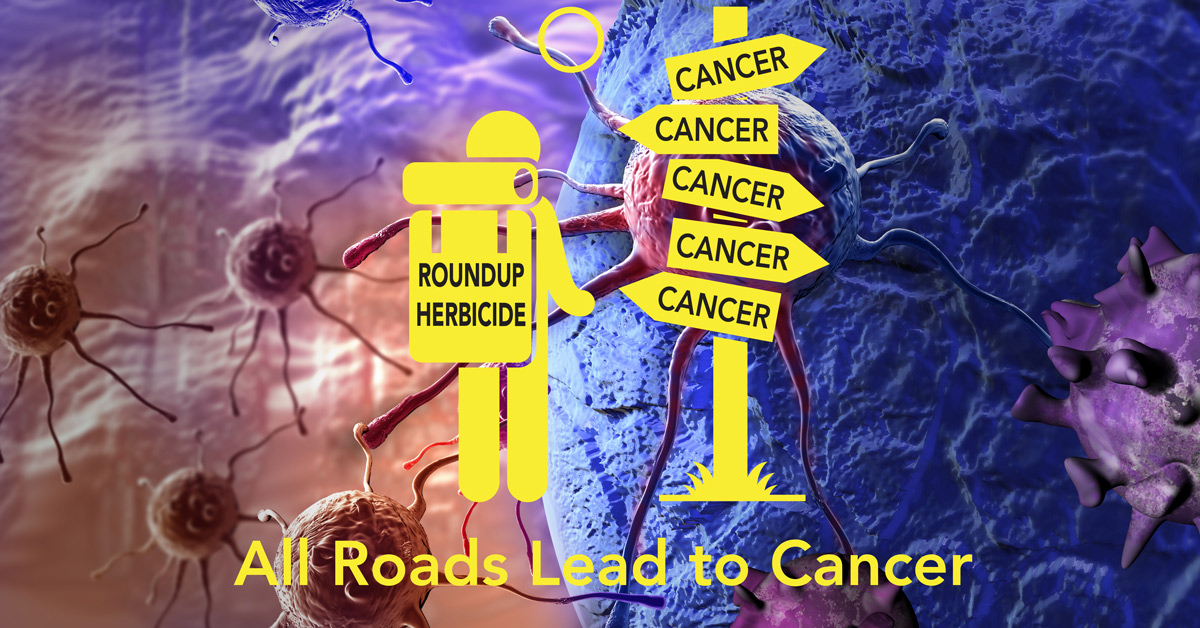 A gene function that is central to multiple cellular processes, p53, is a particular target of these miRNAs. The miRNA changes can lead to alterations in p53 gene expression, as has been found in multiple types of cancer in humans.

Furthermore, increases in miR-10 have been found in other studies to be associated with leukemia, a blood cancer. The increase in mir-10 caused by glyphosate exposure in the experimental animals may provide one mechanism by which users of Roundup have succumbed to another blood cancer, known as non-Hodgkin lymphoma. These results could strengthen the legal cases of the cancer sufferers in the US who are suing Bayer/Monsanto because they believe that exposure to Roundup caused their disease. Three such cases have already been decided in favor of the plaintiffs.

Study lead Dr Michael Antoniou of King's College London said, "The new data showing changes in miRNA patterns add yet more evidence to the cancer-causing potential of glyphosate and Roundup. What is more, our results show that it is not just Roundup, which is a mixture of glyphosate with various additives, that has carcinogenic potential, but also glyphosate alone."

The new data confirm and build on previously reported findings that were published as a pre-print in abril 2021, which GMWatch reported on. The study with the additional findings has now passed peer review and is published in the prestigious journal, Toxicological Sciences.

The pre-print version of the study had reported that glyphosate and glyphosate-based herbicides such as Roundup activate mechanisms involved in cancer development, including DNA damage – and these effects occur at doses assumed by regulators to have no adverse effects. The data suggest that the DNA damage was caused by oxidative stress, a destructive imbalance in the body that can cause a long list of diseases. Oxidative stress is the likely cause of the damage seen to the liver, leading to an inflammatory (immune type) response, which in turn can cause DNA damage.

Crucially, the study found that the isolated active ingredient of Roundup – glyphosate – damaged DNA. This finding, according to the EU’s pesticide law, should result in a ban on glyphosate and all its formulations.

All these findings are carried over into the peer-reviewed version of the study.

How the study was done

The study builds on the findings of a previous one by the same authors. In the previous study, the researchers had compared the effects in rats of MON 52276 with those of its "active ingredient", glyphosate, tested alone. The findings showed that glyphosate and Roundup herbicide, given at doses that regulators say are safe, resulted in the animals suffering gut microbiome disturbances and oxidative stress, with indications that the liver was affected and possibly damaged.

In the current follow-up study, the researchers analyzed the liver tissue from the same rats to see if the damage had indeed occurred.

The researchers carried out some of the standard tests that regulators require the pesticide industry to conduct to gain market authorization for their products – namely blood biochemistry and kidney and liver histopathology (microscopic examination of tissue).

They also carried out in-depth tests (molecular profiling) that are not demanded by regulators or typically carried out by the industry. One type of test looked for adverse effects at a profound molecular level of biological functioning through analysis of gene expression (transcriptomics) and epigenetics (DNA methylation) in the liver and kidneys. Another type of test, using specialized genetically engineered cell lines, was intended to highlight changes in function linked with cancer formation.

In addition, the researchers carried out tests that can detect direct damage to DNA.

The finding of fatty liver disease from exposure to the MON 52276 formulation of Roundup confirmed the same researchers' previous observation that an ultra-low dose of another Roundup formulation, Roundup Grand Travaux Plus, was administered to the same strain of Sprague-Dawley rats over a 2-year period, caused non-alcoholic fatty liver disease.

Worryingly for public health, it was the non-standard molecular profiling tests that are not required by pesticide regulators that were most revealing.

First, Roundup was found to alter the expression of 96 genes in the liver specifically linked to DNA damage and oxidative stress, as well as disruption of circadian rhythms or "body clocks". The most affected genes in the liver also had their expression similarly altered in kidneys. Crucially, a core set of genes whose expression was altered by Roundup was similarly changed in the glyphosate-treated animals. This strongly suggests that the key changes in gene function reflective of oxidative stress and DNA damage were due to glyphosate and not the additional substances (adjuvants) present in the Roundup formulation.

Second, direct DNA damage to the liver was found to increase with glyphosate exposure.

These findings potentially constitute a bombshell that could end the authorization of glyphosate in the EU. That’s because the EU pesticide regulation (1107/2009) has what’s known as hazard-based cut-off criteria. This means that if a pesticide's active ingredient is shown to cause a certain type of harm to health at whatever dose, it must be banned. One of the named types of harm is damage to DNA. The discovery that glyphosate alone damages DNA in a living animal should, if regulators follow the law, result in a ban on the chemical.

Third, both glyphosate and Roundup were found to cause epigenetic changes known as DNA methylation. Epigenetics describes layers of molecular structures associated with DNA that control the underlying function of genes. The defining feature of epigenetic changes is that they can alter how genes work but do not involve changes to the actual DNA sequence. These types of changes were found at over 5,000 genomic sites for glyphosate and over 4,000 for Roundup. This is a concern because such alterations are typically found at high frequency in cancer tissues.

All findings lead to the same conclusion

The researchers performed further laboratory tests in mouse cell lines, which are designed to highlight effects that can lead to cancer formation. Glyphosate and three Roundup formulations were assessed in these tester cell lines. It was found that two formulations of Roundup herbicide, but not glyphosate, activated oxidative stress and misfolded protein responses, both clear markers of carcinogenicity.

Commenting on the totality of the data, Dr. Antoniou said, "No matter what molecular measurements we undertook, they all led to the same conclusion: that is, both glyphosate and Roundup are potential carcinogens."

Other studies, including the industry ones submitted to support regulatory approval of glyphosate, have also found that glyphosate causes cancer in experimental animals. Based on studies in animals and humans, as well as mechanistic data, in 2015 the International Agency for Research on Cancer (IARC) classified glyphosate as a probable human carcinogen.

Other implications of the new study

1. Ending animal testing is not yet feasible

Interestingly, in the new study, glyphosate was shown to damage DNA in living animals but not in the cell culture system. This shows that in vitro lab tests using isolated cells cannot fully substitute for evaluations in a living animal because certain effects will be missed. This is because animals (including humans) are whole organisms whose complexity cannot be replicated in a flask, petri dish, or test tube. While many people (GMWatch included) would like to see an end to animal testing, as long as pesticides and other chemicals are allowed to be released into the environment, such a move would put public health at risk.

2. Roundup is more toxic than glyphosate

In summary, Roundup was found to be more toxic than glyphosate, confirming and building on previous observations. However, taken together, the results from the various assays conducted show that both glyphosate and Roundup herbicides activate mechanisms involved in cancer development, causing gene expression changes reflecting oxidative stress and DNA damage. Also, glyphosate alone was clearly able to induce DNA damage.

These findings directly challenge the global regulatory practice of only assessing the isolated declared active ingredient (glyphosate) and not the complete commercial formulations (Roundup) as sold and used.

The study further highlights the power of in-depth molecular profiling "omics" methods to detect changes that are missed by relying solely on conventional biochemical and histopathological measurements conducted in standardized industry tests on pesticide active ingredients. The study paves the way for future investigations by identifying gene expression changes and altered DNA methylation sites, which can serve as biomarkers and potential predictors of negative health outcomes resulting from exposure to glyphosate-based herbicides.

3. Results could allow a survey of the human population for glyphosate herbicide exposure 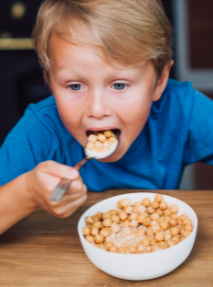 Commenting on the implications of the results for human exposure monitoring, study leads Dr. Michael Antoniou said, "The biomarkers we identified (such as the miRNA and gene expression changes) can be tested for in people, but we don't know if this particular pattern of biomarkers is unique to glyphosate-based herbicide exposure. Thus the biomarkers would need to be correlated with a history of exposure to glyphosate-based herbicides and measurements of glyphosate in urine.

"If high levels of glyphosate were found in the urine, and this correlated with the biomarkers identified in the new study and the person's history of glyphosate herbicide exposure, this would indicate that exposure to glyphosate-based herbicides might be responsible for any health effects that are both indicated by our findings and found in the person. These findings should be tested first by investigations of herbicide applicators, as their exposure can be high and details of the particular herbicides used are often recorded, which would enable clearer results to be obtained."

4. "Safe" and "no effect" doses were shown to be harmful

Adverse effects were found from Roundup exposure at all dose levels in a dose-dependent fashion. These findings show that the glyphosate ADI for the EU – and that of the USA, which is even higher – is not safe to ingest. Likewise, it shows that the EU and US regulators were only able to conclude that glyphosate had "no observable adverse effect" at the levels mentioned above because the tests that they require industry to carry out are insufficiently sensitive.

Summarising the implications of the study for the Roundup-cancer litigation in the US, Dr. Antoniou said, “Our results are the first to simultaneously show glyphosate and Roundup toxicity in a whole mammalian animal model system and provide a mechanism – oxidative stress – by which DNA damage has been observed in other systems, such as mammalian tissue culture cells.

“These findings show that glyphosate and Roundup score positive in various tests of carcinogenicity – transcriptome/epigenome/miRNA changes, oxidative stress, protein misfolding, and DNA damage – in a living animal (rat) that is accepted as a surrogate for human health effects. In my view, this strengthens the argument that exposure to Roundup herbicides can lead to the type of cancer suffered by the plaintiffs in many of the court cases – non-Hodgkin lymphoma.”