At every level, a thriving and well-functioning brain is fully dependent upon the gut. How can this be so? 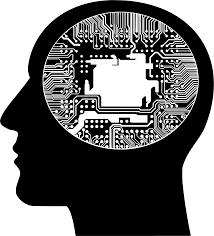 First of all, every cubic centimeter of your bowel lining contains hundreds of thousands of neuro-connections. If you can visualize it, this is an amazing array of neurologic intelligence. All happening in your body every day, every moment.

Science has a lot to learn in this area, but it's becoming clear to neuroscientists who directly study the brain that mood and other brain functions are not initiated in the brain. Your gray matter is merely your processor.

Your brain is not the initiator of your thoughts!

What scientists are finding is that the initiation of your mood and other brain functions starts in your gut. Your gut is the largest portion of your peripheral nervous system. Your largest sensing organ. But how does all of this help improve and optimize your brain health?

It strongly indicates that you can’t have top-level performance in mental health without fundamental gut health. And, you can’t have gut health if your gut lining, your first line of immune defense, is compromised. Yet we live in a world of toxins that assault our gut lining every day. So what does that look like?

Here are some examples of dysfunction that science is starting to trace back to the gut:

Bottom line? The best supplement for the brain is the one that best supports gut health.

That supplement is called Restore... 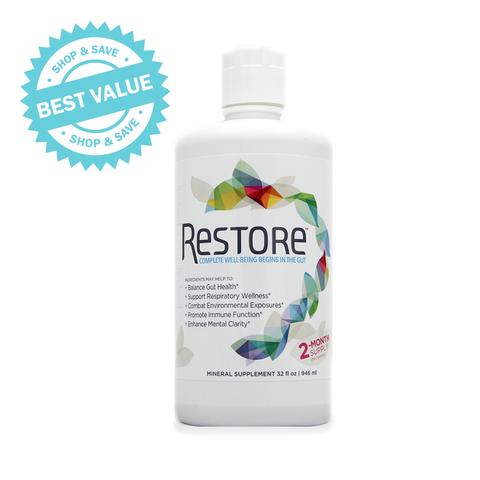 Recent Studies and Scientific Research on the Gut-Brain Connection:

1. Critically explores the current evidence in identifying a role for the gut microbiota in modulating the brain and the gut/brain axis in humans.

2. Discusses the intestinal microbiota as being potentially important to development of many childhood diseases such as autism spectrum disorders, allergic disease, and obesity. The authors highlight the impact factors on microbiota colonization in early-life and the developing systems that may be involved in the manifestation of childhood diseases.

3. Demonstrates that microbiota can regulate the maturation and function of the neuronal cell microglia by showing in experiments with mice that changes in host-microbiota were associated with variations in microglia properties.

1. Evaluates neurotransmitters as a major player in regulating enteric neuronal development, and that deficient neurtotransmitter signaling during development may contribute to gastrointestinal disturbances and behavioral features of Autism Spectrum Disorder.

2. Provides a state-of-the-art description of the mechanisms by which gut microbiota can affect the gut-brain axis and the multiple cellular and molecular communication circuits, including the neuroactive transmitters, with special focus on gamma-aminobutyric acid (GABA) signaling.

3. Assesses the role of the gut microbiome in shaping brain development and neurological function, and the mechanisms by which it can contribute to mental illness. It also discusses the influence of gut microbiome on neural development, cognition and depressive-like behavior.

1. Discusses the dysbiosis and inflammation of the gut linked to gut microbiota and associated with the development of mental illnesses such as anxiety and depression, and possible applications of probiotics to reduce symptoms.

2. Assesses the role of intestinal microbes in modulating the maturation and function of immune cells in the central nervous system and influence the activation of peripheral immune cells, which regulate responses to neuroinflammation, brain injury, autoimmunity, and neurogenesis. The immune system as an emerging and important regulator of the microbiota-gut-brain axis during health and neurological diseases.

3. Reviews the effects of the microbiome on the immunological system and the influence of the microbiota-derived bioactive molecules in the promotion of inflammation within the intestine and distally at sites as anatomically remote as the brain.

1. Reviews the bidirectional interactions between gut microbes and the central nervous system that can collaborate to development of many psychiatric and neurological disorders.

2. Provides a comprehensive overview of the role played by gut microbiota and the enteric nervous system in development of many neurological diseases, such as Parkinson’s and Alzheimer diseases, amyotrophic lateral sclerosis and multiple sclerosis.

3. Postulates that development of Alzheimer’s disease may be closely related to the imbalance of gut microbiota by detailing that increased leaky gut and the consequent invasion of different bacteria and viruses can lead to neuroinflammatory reactions in the brain.

4. Discusses that increased intestinal permeability can directly affect the central nervous system and be associated with the development of multiple sclerosis (MS) and that disease-modifying drugs in MS could alter the intestinal barrier and the microbiome.

6. Reviews the available clinical data and animal experimental models pointing to the neurotransmitter serotonin as a major player in the development of autism spectrum disorder (ASD) as high levels of the serotonin system have been identified in ASD.

Addresses the microbiome’s multiple interactions with the central nervous system (CNS) and the blood-brain barrier—and the related effects on brain function.

Suggests that low-grade gut inflammation may be the trigger responsible for over-activating parts of the brain in Parkinson’s disease (PD) and may provide clues to biomarkers that can identify early PD.

Discusses the gut microbiome’s influence on formation of the brain’s serotonergic system—the neurotransmitter system that, when disturbed, plays a key role in the development of neurological diseases such as multiple sclerosis.

Argues that the therapeutic potential of the microbiota-gut-brain axis requires more “robust” and “reproducible” research to address knowledge gaps about functions and interactions between the gut microbiome; the endocrine, immune, and nervous systems; and the brain.

Explores mounting evidence that the gut microbiome plays an important role in directing and facilitating developmental processes in the brain.

Describes how disruptions in the health of the gut microbiome contribute to numerous disease processes, as illustrated by the relationship between gut health and brain and behavioral function in autism spectrum disorder.

David Perlmutter describes the intricate relationship between the gut microbiome and the brain in his New York Times bestseller, Brain Maker; in this article, Perlmutter and others talk about the “medical revolution” underway in the treatment of brain-related disorders.

Reports Danish research on gut health and Parkinson’s disease focusing on the role of the vagus nerve as the pathway to the brain.

See also, “Parkinson’s may begin in the gut and spread to the brain via the vagus nerve,” Neuroscience News, junio 23, 2015.